The Karhunkierros, Bear's Trail, trekking trail can be hiked from north to south, starting at Hautajärvi and ending up at the Ruka resort, or the other way around.

Traveling to Lapland by public transportation was surprisingly easy. It was time-consuming, however; I started the journey by boarding an 8:30 train, and I did not get off the bus at Hautajärvi until 22:45. Overall, the journey entailed traveling from Hämeenlinna to Oulu on a train, traveling from Oulu to Kuusamo on a bus, waiting for 3 hours, and finally traveling from Kuusamo to Hautajärvi Luontokeskus, on a bus.

It is also possible to book a flight directly to Kuusamo, but I carried more than the basic allowance of 20kg of luggage weight. Furthermore, I'm not, without reservations, entirely comfortable with the flight emissions, even if the trip would be more direct.

Lessons learned: You can't take camp stove gas to airplanes, and there's no place (that I know of) to restock the gas in Kuusamo on Sunday evening. Nor is there an apothecary open, just so you know. There is a supermarket open until 22.00, though. The airplane advice was learned from a fellow hiker on the trail.

(If you know where it is possible to buy campfire stove gas at the Kuusamo town center, let me know in the comments. I'll add it to the article to help others.)

Setting up a familiar tent becomes a routine, but I recommend practicing before setting off to the wilderness. Alas, I was not so wise. I had only set up the new tent once, two months back, on a bright midsummer night evening. It was not routine then, and it didn't get any easier the second time when darkness had already fallen.

Lessons learned: Practice setting up the tent in advance. The darkness levels up the difficulty, and having a lantern in addition to a headlamp helps a lot. It's even more convenient if your headlamp's straps are easy to find, having been packed logically with the lamp. Of course, I had placed them elsewhere.

The first campsite is a lean-to. It is only 500m down a trail from the nature center at Hautajärvi Luontokeskus. I started my journey with two men who had arrived on the same bus. We lit the headlamps and started on the path, the first whiff of the hiking to come.

I'll include more pictures of the campsite in the next post, in daylight, but it essentially has room for three to four tents and the solid teepee-like structure enclosing the fireplace. If there isn't room for your tent when you arrive, you will need to either sleep on the benches of the teepee or hike in darkness to the next lean-to and campsite around 6km away. For the note, 6km means one to two hours of hiking, especially in the dark with only headlamps.

Two hikers arrived after us at the campsite. They continued into the woods as we were setting up our three tents.

Oh, the sense of accomplishment when the tent finally stood, with the equipment inside, mattress, and pillow uncompressed, only 40 minutes later.

As the two travelers and I settled for the night, the river flowing nearby was surprisingly loud (video below), and the earth near the riverbed was remarkably cold.

Lessons learned: Sleeping mattresses have an insulation value (R-value), representing how well the mattress insulates from cold in the ground. Near a riverbed, even on seemingly dry earth (gravel), the ground is much colder than in the pinewood forests. So much so that each of us three staying at the campsite woke up to dress in more layers of clothing during the night.

In the video above, the Kouta-river (Koutajoki) at Hautajärvi, Salla, flows quite loudly on Sunday, 14.8.2022, at nighttime at approximately 23.00.

As I woke up in the morning, there was already a fire burning inside the lean-to. Two men, who had arrived past midnight, chatting and making breakfast. Their gear and mattresses are set up on the open teepee benches.

That morning, the actual journey would begin.

Below you can find an amateur translation of the vocabulary, terms, and names of places used in this post to make conversations easier while traveling.

Hautajärvi is not within the national parks, but as it is a significant location and a part of the Karhunkierros trail, I've included it in Nature destinations of note in Finland. 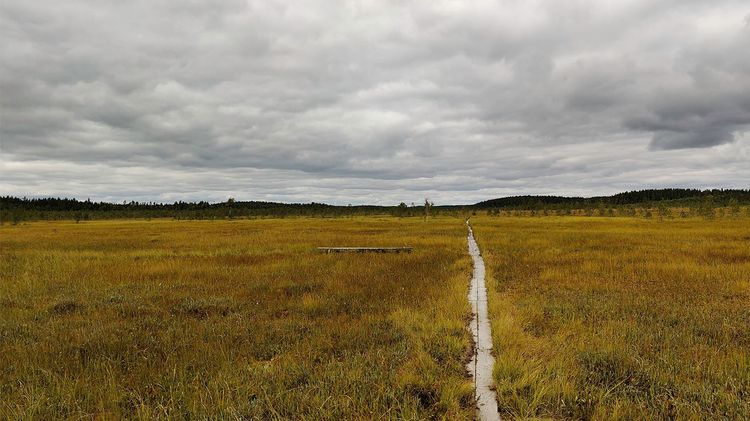 Suurisuo is a large swamp area close to Hämeenlinna, in appearance and size more typical of the North Finland. Fresh air and peace of the outdoors.
Sep 14, 2022
4 min read